I grew up in the era of NASA’s Apollo moon program and was influenced by it and by movies of the day which used model making in their production, particularly 2001: A Space Odyssey. I was fascinated with the way in which film makers could get models to look so realistic. Also fascinating to me was the not so realistic, yet plausible visual style of the Thunderbirds TV series and that of the Lost In Space TV series.

As a young boy, I spent much time constructing plastic model aeroplane kits and scratch building other models from cardboard. My dad and uncle ran a hardware store. Much of their stock came packaged in cardboard boxes, so I had no shortage of cardboard to cut up and work with.

Apollo Lunar Module, early 1970s, almost 1m high. Cardboard construction. The sides of the descent stage was covered in a gold foil style wrapping paper. The photos were taken on my Kodak Instamatic camera with VP 128 film (b/w) and 128C film (colour). I loved taking photos of the models and waited impatiently for the prints to return from the chemist! 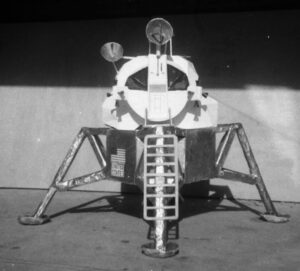 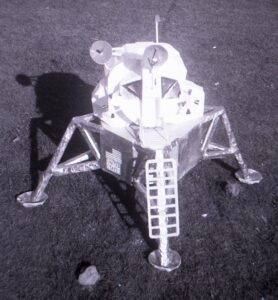 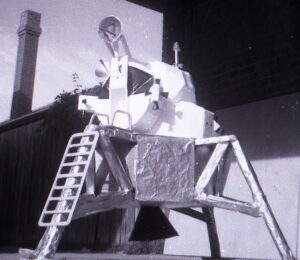 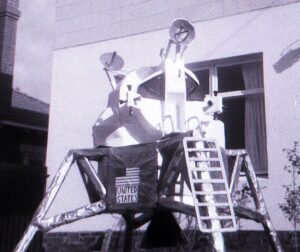 In 1978-79 I was a student at the Melbourne College of Decoration, undertaking a course in Visual Merchandising (then known as Window Dressing and Display). It was at the MCD that I was able to developed new skills including ticket and signwriting, model and diorama making, drafting and working with plaster and polystyrene. I had access to equipment which was new to me including a spot welder, plus hot wire machines for cutting and sculpting polystyrene. This is where I constructed my second Lunar Module – smaller than the first, but with more detail. The legs had a skeleton of spot welded heavy gauge wire. The astronaut is carved from polystyrene and painted with acrylic. LEM height was around 60cm. 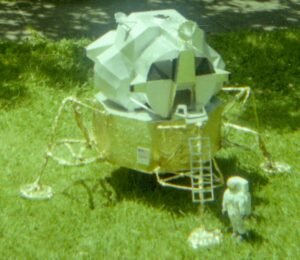 Lost In Space Jupiter II space ship, showing very obvious masking tape holding it together! On later models, I used paper mâché to hide masking tape, and painted over the paper with enough layers of enamel paint to smooth the surface reasonably well. At that stage of my life (around 10), I had no knowledge of body filler or fibreglass… I don’t remember that spray putty had even been invented! I never got around to finishing the model. Cardboard, with legs made from sprue left over from a model plane. Early 1970s. 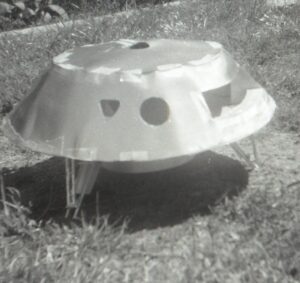 The robot ended up being more like a costume than a model. It was large enough for a small boy to get into. I couldn’t figure out how to make the robot’s bubble head, so just made the triangular head piece. Cardboard, early1970s.

In the photo below, I’m inside the robot! The robot met its end when a school ‘friend’ set fire to it wit me inside it. I had to tear it apart from the inside to escape. The friendship also went up in flames that day! 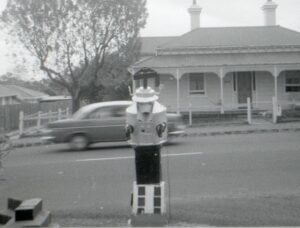 Many years later I started to learn 3D modelling using Lightwave 3D and constructed the robot in 3D, using the model in my animated project Space Patrol when studying for a B.A. in animation at RMIT. 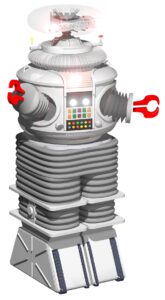 Another cardboard model constructed around the time of my first Lunar Module, seen here next to my uncle’s car. After this I was given a plastic Saturn V model kit, but was not to build another Saturn V until recently when I made one as a 3D printed model. This cardboard model was around 160cm tall, no doubt taller than I was at the time! 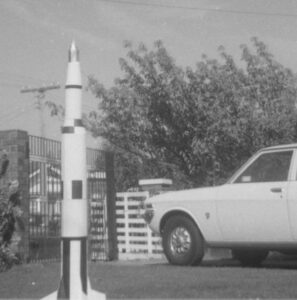 Inspired by the 1974 movie The Towering Inferno, I made a model of the building from the movie as part of a foyer display at a school film night, were I was a member of the Film Club. Unfortunately I don’t have a photo of the display, but it included a movie poster and a model Bell UH-1D Iroquois “Huey” helicopter I had made from a kit, strung up with fishing line. Some crumpled orange and yellow cellophane served as flames. 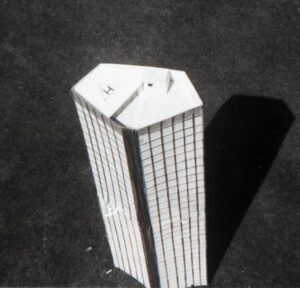 Another model made whilst a student at the Melbourne College of Decoration. The General Dynamics F-16 Fighting Falcon first flew in 1974 and entered service in 1978, so was a very new aircraft when I made this model in ’78 or ’79. Cardboard and Plaster of Paris construction. Not having any ability to make clear, curved parts, I made the canopy by modifying a suitably sized one I bought from a model shop, intended for a P51 Mustang model.

My model has the colour scheme General Dynamics used when spruiking the F-16 to the US Air Force as part of the Lightweight Fighter Program which had been issued in January 1972. Pitched against the Northrop YF-17, the the YF-16 was declared the contract winner in January 1975. No longer a development aircraft, the Y was dropped from the designation to become the F-16. 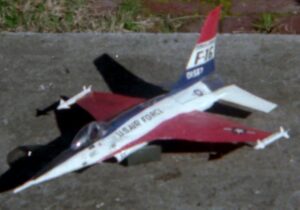 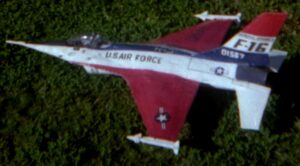 First attempt as a young boy in the 1970s. Cardboard JetRanger. They said it would never fly! 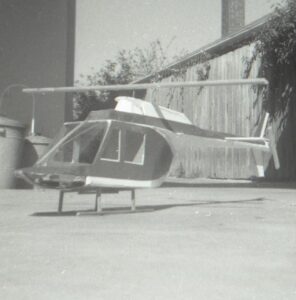 Attempt number two – another cardboard and plaster model made at the Melbourne College of Decoration, 1978 or ’79. The rotors and rotor hub were made of stiff cardboard, but sagged a bit. The windows were made from thin clear plastic sheet, commonly used at the time as the front of shirt box packaging. Landing skids were leftover sprue from a plastic model aircraft kit. The colour scheme is that used by Ansett Airlines of Australia between 1968 and 1981. 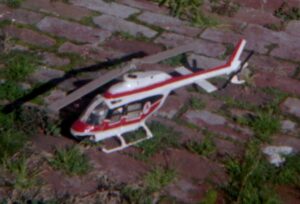 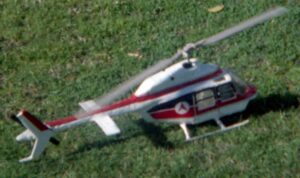 I was involved in a church that was heavily into theatre production. This is some Roman armour, modelled by a younger version of me, sometime back in the 1990s. 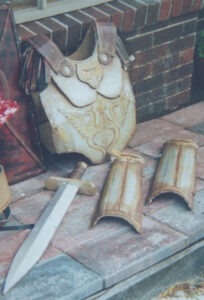 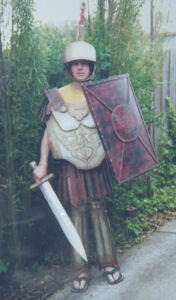 Cardboard backdrops and props made for the church’s 1994 Christmas production “The Carol Medley Show”, set as a live studio production of a Christmas-themed TV show. The audience doubled as the TV show audience. My props included a full sized TV studio camera, signage, a light-up applause sign and a couple of “stage flat” cityscapes inspired by the TV cartoon series “Top Cat”. 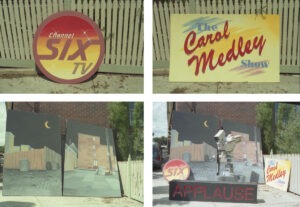 A local paper took interest in my TV camera prop. Clipping from The Independent News, 14 December 1994, p.16. Too bad they spelled my name incorrectly! 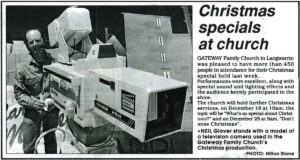