At 110cm tall, this 3D printed model is 1:100 scale of the 110m tall Apollo Saturn moon rocket. I purchased the STL 3D print files from an online 3D library, and modified and resized them to suit using Lightwave 3D. The original files were at 1:60 scale, meaning that the model would have been 1.8m tall and used up heaps more plastic. Some round parts of the model looked a bit too faceted for my liking, so I remodelled them in Lightwave. Likewise some complex parts such as the F1 rocket engines were simplified.

3D prints of F1 engines. The print on the left still has its support material in the nozzle bell 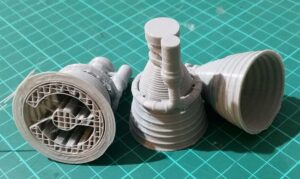 Stage one heat shield with an engine mount in place 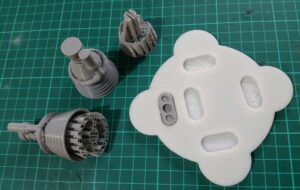 An F1 engine installed into the heat shield. Each of the four outer engines were mounted on a gimbal enabling a degree of steering to help keep the rocket pointed in the right direction. This worked in a similar way to what you would do to balance a long dowel on your finger. 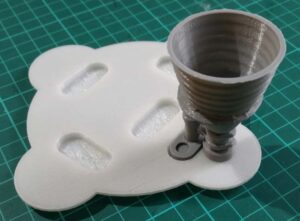 The F1 cluster installed into the heat shield at the base of stage one. 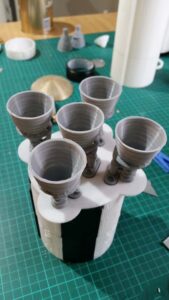 The five engines had a combined thrust of over 7.6 million pounds (34,000 kN), designed to lift the total launch mass of about 6.5 million pounds (about 2,950 metric tons), of which about 85% was fuel and oxidiser.

Saturn V launch vehicles were originally designed to send a payload of about 41 tonnes to the Moon, but upgrades for the last three missions were each able to send up to 48.6 tonnes. Contributing to the extra payload, Apollos 15, 16 and 17 each took a 210 kg Lunar Roving Vehicle battery powered car to the Moon.

The F1 engines burnt RP-1 fuel (a highly refined kerosine similar to jet fuel) and liquid oxygen for 168 seconds, by which time the oxygen and fuel was spent and the first stage was discarded. At the end of the burn time, the launch vehicle had been accelerated to about 8,280 km/h (5,144 mph) and an altitude of about 67 km (42 miles). The five less powerful J2 engines of stage two and single J2 engine of stage three burnt a mixture of liquid oxygen and liquid hydrogen.

Painting the first stage. The cone shaped engine cowls have not yet been installed. The Service Module is visible in the foreground, along with and engines cowl and some of the fins and stage two at the rear. 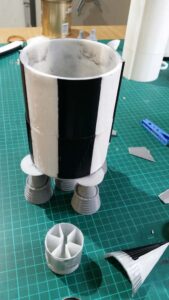 The black and white colour scheme was designed to help engineers assess flight dynamics as recorded by ground-based cameras, particularly roll measurements as the rocket rotated around its vertical axis during launch. Most of the paint job was white to help keep the rocket’s body temperature down as it sat on the launch pad in the hot Florida sun. Minimising the vehicle temperature helped to increase overall safety and reduced boil-off from the liquid oxygen tanks.

The dome of the first stage liquid oxygen tank. The engine cowls and fins have been fitted. On the left is a section of the second stage and the interstage which is a ring that sits between the first and second stages. 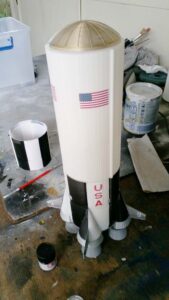 Looking down on the first stage and part of the second stage above it. The fins were labelled as A, B, C, and D, with the quadrants of the body labelled with a series of vertical lines within a rectangular box i.e. I, II, III, IIII. 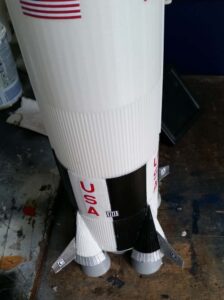 Artwork for the decals was drawn up in Adobe Illustrator and printed on a laser printer. The paper decals were glued in place with a glue stick. For later models such as the Qantas 787 Dreamliner, I purchased laser-printable water transfer decal film. 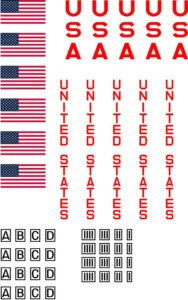 The completed sections. All this to get the relatively tiny Lunar Module to the Moon and the Command Module back to the Earth! 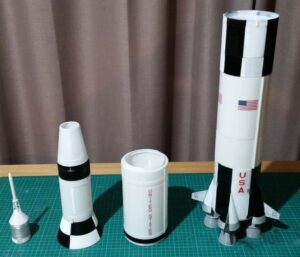