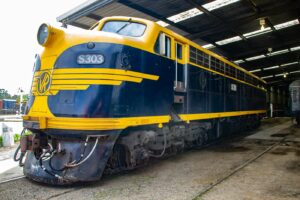 Based on the General Motors EMD F7 locomotive design and similar to the GM12 class, the S class locos for the Victorian Railways was built under licence by Clyde Engineering, which had also built VR’s double ended B Class locos between 1952 and 1953.

Whilst some of the S Class diesel locos have been scrapped, some have been restored and are still in service.

This 3D model is of the S 303, the C. J. LaTrobe, which has been restored by its current operator, the Seymour Railway Heritage Centre.

The template view for modelling was first tried using some photos I took of an HO scale GM loco of an Australian National Railways GM class loco.

But it was easier to use a plan drawing found on the web at victorianrailways.net

Lightwave 3D modelling layout using above plan as a template:
top, side, back and perspective view 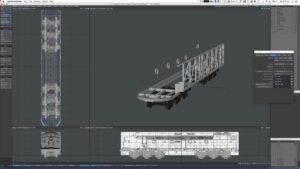 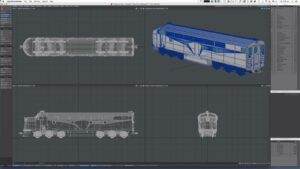 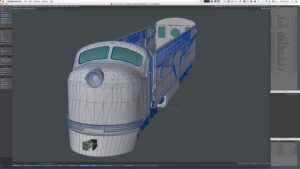 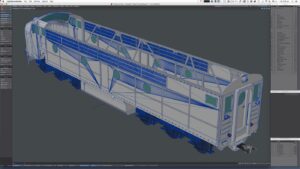 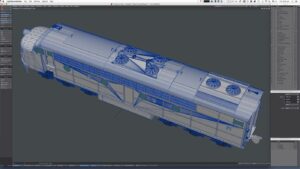 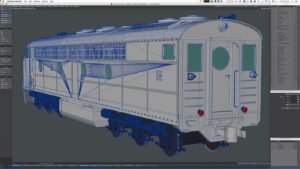 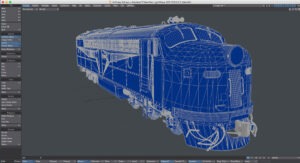 Nose and side frames 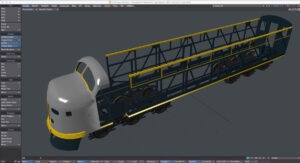 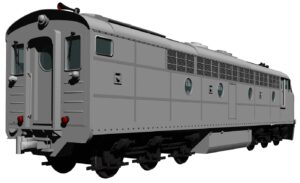 Livery details were added to the 3D model using a ‘UV Map’. This is a flattened representation of the nose section, exported from Lightwave as an image file showing the triangle polygons which make up that part of the 3D model.

The image exported from Lightwave’s UV function was loaded into Adobe Photoshop for applying the VR wings (which I drew using Adobe Illustrator and imported into Photoshop) on a layer separate from the triangles, then saved as another image, minus the black triangle lines.

Using Lightwave’s UV function, the blue and yellow VR wings image was ‘wrapped’ back onto the 3D nose section.

The first time I applied the coloured image, I had forgotten to remove the black lines in Photoshop, which made the 3D model look rather odd! 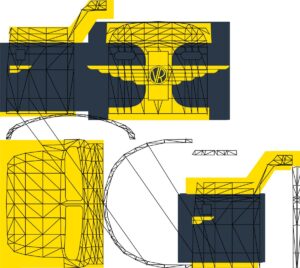 Test render with the UV image on the nose. The other areas have been coloured in Lightwave by applying colour to the surfaces of the appropriate polygons. 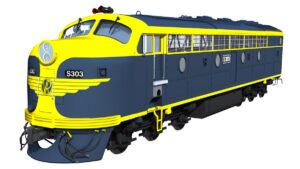 Final renders with proper lighting and shadows, composited onto backdrop photos in Lightwave.

Using Lightwave’s Layout program, the model loco is placed, rotated and scaled in such a way as to match its position and size to make it appear part of the photo backdrop.

When setting up the scene for the final render, a  ‘ground plane’ grid was added for the purpose of creating realistic shadows of the loco model.

A ‘reflection map’ of an image of sky and trees was added to the side of the loco, to give it a bit of a realistic reflective look.

With a bit of experimentation, a pretty good match between the photo shadows and the 3D shadows can be made.

The composited views below are on lines where the mainline S class diesel locos never operated: Mornington and Coldstream stations. 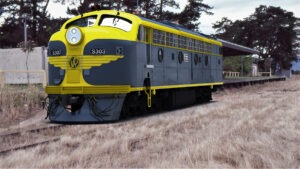 Initially a 3D headlight was rendered, but the result was disappointing, so a lens flare was added in Photoshop. 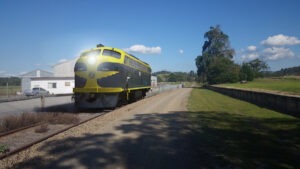 The rails in the Coldstream photo are the remainder of the siding used until 1992 for the fertiliser depot seen behind the loco on the left. The station buildings were destroyed by fire in the 1990s. All other rails have been removed except for a short overgrown section of what would have been the Yering Station yard.

Hopefully by the end of 2022 the trail will be extended from Yering to Yarra Glen (Stage 1b). The rail corridor between Yarra Glen and Healesville is being restored as a tourist railway by the Yarra Valley Railway. Stage 2 of the trail will run alongside the tourist railway to Healesville and eventually on to Warburton to join the existing Lilydale to Warburton trail creating a trail loop of more than 80km.

The Mornington line from Baxter was officially closed and declared out of service on 15 June 1981; in 1989 the termite infested station buildings were demolished and the state government sold the site to developers who erected the current shopping centre in 1999. Part of the original line between Moorooduc and the current Mornington Station (now east of Nepean Highway), is operated by the Mornington Railway Preservation Society.