Modelling a cup, drinking glass or bottle seems to be a standard exercise for someone learning 3D, so here’s my attempt at a mug. 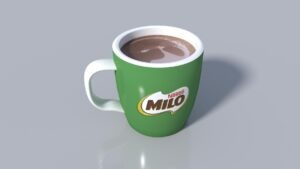 Lightwave 3D is a two-part program; the Modeler part for constructing model geometry and assigning basic surface characteristics, and Layout for assembling single or separate models into a scene, lighting it appropriately, and animating it if needed. Whether a series of still images for an animation or a single image,  Lightwave Layout is responsible for rendering the scene to the final quality, displaying all the lighting, shadows, reflections and surfacing. Lightwave does actually have a third part called Hub for managing data exchange between Modeler and Layout, but Hub generally runs in the background, seldom, if ever, requiring the user’s attention. 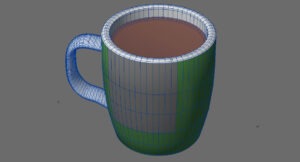 In Lightwave Modeler, surface attributes are being assigned to the model; the Milo logo is a TIFF image. Modeler only provides a basic view of surfacing, basic lighting and shadows; the final quality image has to be rendered in Layout. 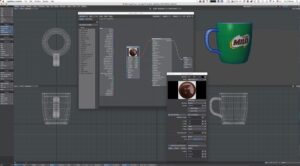 The liquid surface is made from a photo of a real cup of Milo. The photo was colour corrected and generally cleaned-up in Photoshop, then added to the surface representing the liquid in the Lightwave model as a ‘texture map’. A texture map is a graphic image or photo that is applied to a surface of an individual model polygon or a group of polygons. 3 or 4 vertex polygons are  The floating palette is the Camera Properties common, but in Lightwave, polygons can be constructed with more vertices. 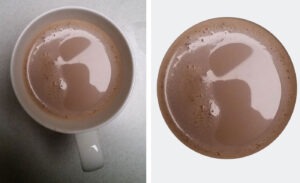 In Lightwave Layout, the virtual camera is positioned to the dispersed view for the final render. Lights are added, shadows and reflections are created. The floating palette is the Camera Properties window. Lights are shown in yellow wireframe. The top right pane is a low resolution camera view; the bottom pane is a side view. The camera view will be rendered out as the high resolution final image showing all the detail. 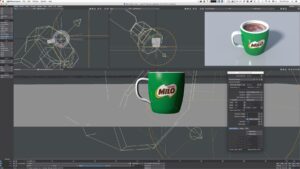 No comments to show.
NG