Made as a student animation project while at RMIT undertaking a BA in Animation and multimedia in 2002.  3D modelling, animation and individual video frame renders done in Lightwave 3D using four PCs and an Apple Mac. Final video editing completed on the Mac using Apple’s FinalCut Pro 7.
The planning and modelling took a whole semester. I had already modelled the Lost In Space robot in Lightwave 3D for a previous assignment. 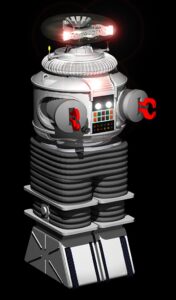 The animating, rendering and final video editing took the following semester, but was finished with about two weeks to spare. The animating, rendering and editing tasks were split up on separate computers which crunched along for about 41 days straight, 24 hours per day… a task that would have been performed much quicker with just one of today’s computers!
The visual look was somewhat inspired by the Lost In Space and Thunderbirds TV series, a bit of Star Trek, with obvious Star Wars similarities. Originally the idea was to model and animate the characters with 3D strings attached, similar to Thunderbirds marionettes. Lip synching for the vocals was also planned, but abandoned due to time constraints, hence all the characters have some sort of face covering so their mouths are not visible.
The only piece of live action video is of the emperor ‘Prime Darth-Sinister’, composited into a 3D environment. The ’emperor’ video footage was of my then 10 or so year old son wearing a blue bed sheet like a cloak.
Sound effects for some of the space ships included recording an old vacuum cleaner slowly stopping after being turned off, and squeaky wheels from an old food trolley for lever sounds in the spaceship bridge. Various friends were roped in to provide voice acting.
The video is a sort of 3D cartoon style commentary about the Australian Government of the day’s philosophy regarding asylum seekers and corresponding efforts to stop refugees arriving on Australia’s shores by boat; the government’s galactic counterparts try to stop alien refugees from reaching Earth.
NG